ImportsDB utility, collects information about API functions in different DLLs and can generate include files in different formats for every library.

Besides function names, type and DLL, ImportsDB handles functions arguments as well and can export them in the extended include files that to be used with advanced IDE features, such as Fresh "Procedure argument hint" and for different macro features, as argument count check in "invoke" macro, automatic creation of ASCII/Unicode default names etc.

Additionally, ImportsDB can collect help information about functions and their arguments, that is not used for now, but can be helpful for the future use of the utility.

This is the first published version of ImportsDB utility. The future of this project is somehow nebulous for me, but it looks pretty promising.

Also, the sources of ImportsDB can be used as an extended example for database programming using assembly language. ImportsDB uses SQLite as a database engine. 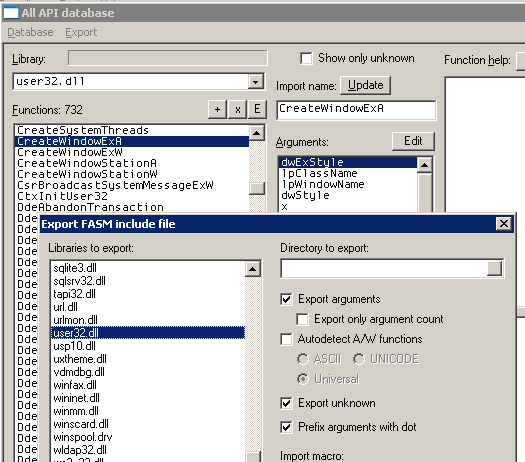 ImportsDB can be downloaded from the link below, with full source and prepared database, containing several thousands API functions, many of them with argument information.

Of course, this version is the first one, so you can expect some bugs, missing features and misbehaviours. The files created by ImportsDB in general needs some (little) manual editing in order to be used in practice.